Apple has finally launched the much-awaiting iOS 9 after the typical multi-month beta period that began this past summer at WWDC 2015. Apple has released iOS 9 to the general populace on September 16 i.e., on Wednesday. iOS 9 can be upgraded who are running iOS 8 on their Apple devices. As soon as the company released iOS 9, millions of people have already updated from iOS 8 to iOS 9. Still there are some stragglers who had a bad experience with the previous handset iOS 8. In everyone’s mind, there is a query that whether it is worthy to upgrade it to iOS 9. Here is a video that clarifies your doubt by comparing the performance and speed of iOS 9 with iOS 8.4.1 along with other iOS devices from  iPhone 4s to iPhone 6 and iPhone 6 Plus. Take a look at the smart comparison!

Here is the comparison between the previous phone iOS 8.4.1 and the currently released handset iOS 9. To make this comparison as appealing as possible, EverythingApplePro has assembled and tested a pair of each supported iPhone ranging from the iPhone 4s to iPhone 6. A 9-minute video below shows the comparison in terms of performance and speed. The comparison also reflects storage, boot time, network speed, the launch time for any app and the benchmark test from Geekbench. Let’s take a look how the comparison goes on and is it necessary to upgrade iOS 8.4.1 to iOS 9. What kind of aspects are better on what type or model of iPhone?

A mere 9-minute long video gives a complete overview of the latest iOS 9 handset’s potential to make their devices run slower or faster. However, it is true that the speed of the handset will definitely depend on the model of iPhone that an individual might own. For example, let us take an earlier device, iPhone 4s. When we compare speed of iPhone 4s with the newer generation iPhones, comparatively it will be lesser in speed than the present iPhone models. To get a clear picture and a meticulous comparison, you can check out the below video: 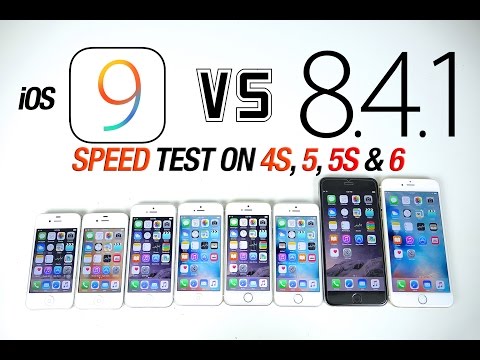 Did you watch the complete video? Well, all the details shown in the above video are totally based on the real world  performance of various iPhone models. iOS 9 is the latest phone released by the Apple company and it comes with a bunch of new features along with the hood improvements. But, all these new features are not quite impressive and alluring as we thought it would be.

Some of the tests conducted on both the iPhones show that iOS 8.4.1 is much faster than iOS 9. This got confirmed when speed test has been done on both iOS 9 and iOS 8.4.1. This shows it is a complete overhaul of Apple’s operating system.

In the Geekbench performance conducted on iOS 8.4.1 and iOS 9 and all other iPhone models, it was clearly shown that the latter models scored more than the prior iPhone models. But, there is no much difference among the various models. We have already mentioned that updating of OS totally depends on the type or model of iPhone an individual owns.

So, now you might have a doubt whether it is worth upgrading to iOs 9. It depends on your current using iPhone model. Suppose, you are currently using an iPhone 5s or later models, then you can go ahead with them. For those who have iPhone 5 or lower, they should reconsider their plans to upgrade.

Apple is already working on iOS 9.1 which is highly anticipated to bring a lot of performance enhancements and bug fixes that are missed in iOS 9. So, let us hope this will finally enhance the iOS 9 experience on all iPhone devices, both older and newer. The beta build for iOS 9.1 have already been made available to developers for this version  which means that we can probably expect the release of iOS 9.1 in the month of October or November this year. Finally, we would advise all the users of low-end iPhones to wait for the final build of iOS 9 to experience better performance and speed.

Hope this guide helps you in the best way to know about the currently released iOS 9 and prior iPhone models. You can now decide whether to upgrade your device to iOS 9 based on the type of model you are currently using. It is advisable to wait till the final build of iOS 9.1.

100 Best Wi-Fi Names For Your Router! Which One Are You Picking?

Bought a brand new router? Want a catchy name for your network END_OF_DOCUMENT_TOKEN_TO_BE_REPLACED

All you need to know about GB WhatsApp

WhatsApp is one of the most successful messengers out there. There are END_OF_DOCUMENT_TOKEN_TO_BE_REPLACED

Blogging involves multiple online tools to influence lives offline. If you are END_OF_DOCUMENT_TOKEN_TO_BE_REPLACED