A group of Muslim hacktivists going by the online handle of Di5s3nSi0N hacked the official website of ISIS/ISIL (Daesh) and leaked an email list of nearly 2,000  people who had subscribed to the terrorist organization ISIS site’s updates. 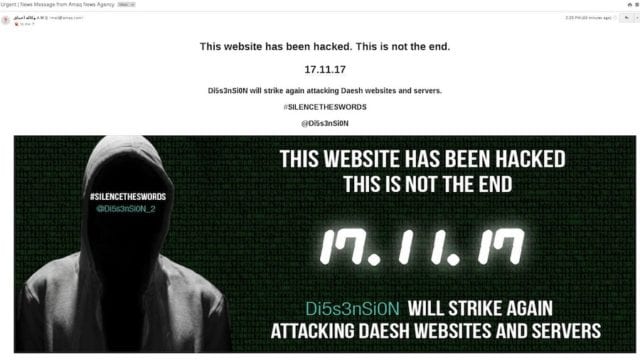 Just a week ago, the targeted website Amaq, one of the key news outlets of ISIS, claimed that it was facing increasing cyber attacks, therefore, it has increased its security and now their admins can tackle “any type of hack.” The news agency, which issues claims for various terror attacks carried out anywhere in the world, has faced numerous cyber attacks and takedowns from hacktivists in the recent times.

“In response to recent events, we have imposed more stringent security measures on our systems. We can now handle email attacks or any type of hack,” said the email in Arabic, according to The Independent.

The statement was more like a challenge for Di5s3nSi0N, which they accepted and hacked their email service within three hours. They found a security flaw on the site allowing them to steal the addresses of 1,784 subscribers, which were partially verified by The Independent.

Upon taking over the site, the hacktivists sent an email to Amaq subscribers from the site’s official email address, with their own logo and following message:

“We have hacked the full “secure” email list of Amaq! Daesh…shall we call you dogs for your crimes or snakes for your cowardice? We are the bugs in your system.”

The hacktivist group also wrote on Twitter and shared the update, calling the challenge ‘too easy.’

Although the Amaq site was down for some time on Saturday, it now appears to be back online. However, Di5s3nsi0n has threatened to take the site offline again on 17 November.

Due to these crackdowns, Amaq is shifting to encrypted modes of communication and rapidly shifting websites.

Di5s3nSi0N has been carrying out these attacks under the #silencetheswords campaign, which will be completed later this week.

How to Create a New Electronic Hardware Product

How to Fix Printing Problems in QuickBooks?