This is surprising since the Note 8 is powered by Qualcomm’s Snapdragon 835 chipset (which is almost a year old) whose performance is nowhere near that of the A11 Bionic chip powered by iPhone 8 Plus. The 6-core A11 Bionic chip inside the iPhone 8 (and iPhone 8 Plus) is nothing short of a beast. In benchmark tests, the chip easily beats the Snapdragon 835 powering most of the flagship Android devices. It is certainly a monstrously powerful system-on-a-chip (SoC), capable of beating even desktop-class computers such as Apple’s own MacBook Pro.

Samsung phones have always lagged behind iPhones and even other Android phones in such real-world app opening benchmarks. However, with the Galaxy Note 8, Samsung seems to have made some underlying optimisations which seem to help its real-world performance.

Under the test, a fixed set of 16 apps are opened in two laps on a device, ranging from light programmes like Calendar and Settings to more graphics-intensive tasks, like games and a Photoshop image export.

Interestingly, the Apple‘s iPhone 8 Plus won the first lap of the speed test to the Note 8, but lost out on the second lap, in which all the apps were once again reloaded from the RAM of the phone. The Galaxy Note 8 managed to load all the apps faster second time around, thanks to its 6GB RAM which allowed it to keep every single one of those apps in active memory, so it opens them instantly. However, the smaller RAM in iPhone 8 Plus caused it to slow down when relaunching apps. With its 3GB RAM, it was only able to keep a certain amount of apps in its memory and had to unload the rest.

Check out the video below: 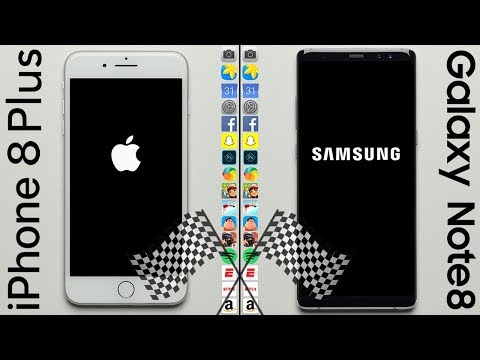 iPhone has had a good record in previous speed tests filmed for Phonebuff channel, beating most top-rated Android phones by a wide margin — except for the OnePlus 5. However, these speed test results were a little shocking when the iPhone 8 lost out to Samsung Note 8.

Although such differences may not really pop up in real life usage, it certainly gives a sense of how the device might perform. Considering how widely Samsung has been criticised for the poor performance of its flagship devices, it is finally nice to see the company catch up to the competition and offer performance on a similar level.

What do you think about the Galaxy Note 8 beating the iPhone 8 Plus in this speed test?

Maximizing Your Profits With Bitcoin Trading

Millions of people are part of the Bitcoin network. Due to its END_OF_DOCUMENT_TOKEN_TO_BE_REPLACED

QuickBooks Error 1603 is one most common issues faced by the users. END_OF_DOCUMENT_TOKEN_TO_BE_REPLACED

Collaboration is an essential element of design. But what happens when your END_OF_DOCUMENT_TOKEN_TO_BE_REPLACED