It’s not every day that OPPO India launches its impressive line of the latest mobile phones. For all those of you who have been waiting eagerly for the OPPO Reno6 series to drop in India, well then, we’re here to tell you, your wait is finally over.

The Reno6 series consists of 2 models, OPPO Reno6 and its premium version OPPO Reno6 Pro 5G. OPPO has been quite the trendsetter in recent times, offering highly functional and durable phones coupled with exciting designs and features.

With the OPPO Reno6 series launching in the Indian market, speculations and comparisons have reached an all-time high. So, if you’re looking to buy the OPPO Reno6 smartphone then be sure to prepare yourself for the launch on 14th July 2021, 3 pm IST.

Avoid all the confusing buzz and read on as we offer you 10 speculative features of the to-be-launched OPPO Reno6 smartphones!

First, let’s talk about the color finishes that the Reno6 line plans to wow us with.
The OPPO Reno6 line will most be available in two color variants, Aurora and Stellar black. The Stellar black is a perfect fit for users gravitating to dark and striking tones while the laid-back Aurora caters to all who want to add a bit of sparkle and shimmer to their monotonous lives. These colors are said to be combined with OPPO’s Reno glow attribute leading to the Aurora offering a mesmerizing look and feel to your handset.

Moving on, both the new mobile phones boast an AMOLED display which makes screen time an absolute treat with sharp and immersive visuals. On one hand, the OPPO Reno6 Pro 5G is said to feature a 6.55-inch, punch-hole AMOLED screen, while its standard counterpart is said to come with a 6.43-inch, punch-hole AMOLED display with a 90h Hz refresh rate. OPPO has a long-standing history of providing full HD plus resolutions, ensuring a stimulating visual experience be it in gaming or simple video playbacks, and we can be sure to expect the same in this lineup as well.

One of the key highlights to be expected of the OPPO Reno6 series is the integration of elegant design with intelligent technical features. The series introduces the first of its kind Reno glow diamond spectrum technology in its latest mobile phones.
Skipping the technicalities behind the technology and jumping straight into its functionality, we can essentially understand that this technology allows the smartphone to create a contrasting yet extremely appealing look by pairing matte texture along with a shiny shimmering appearance.
The Reno glow allows the Aurora finish to exclude warm, subtle colors at different angles and lighting. This design, however, is not only for display, the new mobile phones also boast of increased durability and sturdier grip due to this innovative technology.

The smartphones are said to be made up of a durable AG glass back, bringing a dimension of comfort and lightness to your smartphone. The AG glass back also adds an extra element of fingerprint and stain-resistant properties to create a smooth and practical user experience.

The OPPO Reno6 will be powered by the MediaTek Dimensity 900SoC while the Reno6 Pro 5G will be powered by a 3.0GHz octa-core processor, which will be of 1200 MTK Density. These high-speed processors will enable a superior user experience with faster performance and speed for calling/media/gaming etc, making it a captivating experience for consumers.

The sophisticated processors are said to be backed by 12GB RAM and 256 internal storages, present in both the models of the Reno6 series, which can be further expandable with Micro SD cards to cater to individual user needs. The commendable pair of impressive RAM and storage will definitely feature as a plus for people looking to buy the OPPO Reno6 series.

The OPPO Reno6 may feature a 4,400mAh battery while the OPPO Reno6 Pro 5G is said to ace it up a notch with dual cell batteries of 2200mAH, giving the user a combined capacity of 4500Mah.
Both the phones are said to support 65W SuperVOOC 2.0 fast charging ensuring enhanced performance with lesser downtime.

Coming around to the much-anticipated camera, a feature that OPPO is popularly known for. The OPPO Reno6 series is said to feature triple rear cameras consisting of a 64-megapixel main camera, an 8-megapixel secondary sensor, and a 2-megapixel tertiary sensor with a 32-megapixel selfie camera. 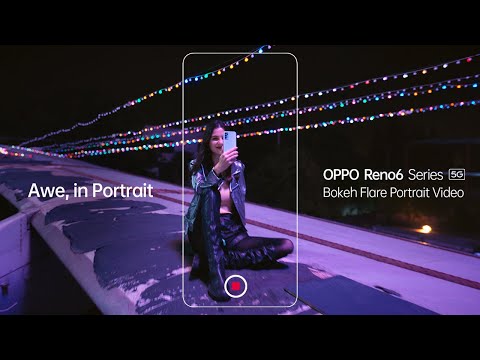 Adding on to the impressive cameras, the Reno6 line will also introduce the one-of-a-kind Bokeh Flare Portrait video features. This means that no matter where you are, all you need is your OPPO smartphone in order to take brilliant videos that are on par with professional videography. The Bokeh Flare effect lets you experiment, create, and finally share visually stimulating videos with industry-leading AI highlight video capabilities that let you take immersive videos in portrait form.
With intelligent AI tech in place along with Bokeh Flare, you will always be prepped with a studio-level setup no matter where you are.

Both of the phones in the OPPO Reno6 series are rumored to run on ColourOS 11.3, based on android, ensuring a 4D immersive gaming experience, quick startup, and hyper boost 4.0 in Reno6 5G and 4.1 in Reno6 Pro. With added personalization, enhanced privacy, suitable dark modes, and smoother user navigation and control, the OPPO Reno6 series looks to introduce a change in the way we interact and use our smartphones today.

While these are the primary features that most users look forward to, the Reno6 series will exhibit other exciting features paired with functional durable aspects.
The OPPO Reno6 price in India is speculated to be on par with the price lines of its Asian counterparts. With OPPO’s continued commitment to high speed paired with efficient performance, we are sure the Reno6 series will leave no stone unturned to ensure complete user satisfaction. We can only wait eagerly for 14th July, 3 pm to get a closer look at the 2021’s most-awaited 5G smartphone!