In the opening keynote for Consumer Electronics Show (CES), Las Vegas, Jan. 8, 2018, Intel CEO Brian Krzanich covered a wide range of topics including the future of computing, Artificial Intelligence to Virtual Reality, cars, drones and other forms of immersive media.

Other than autonomous cars, Intel also demonstrated the Volocopter, a fully electric, 18-rotor, autonomous passenger drone designed for passenger transport. The vehicle will take off and land vertically just as the air taxi that Uber and Nasa together are working on. Krzanich called the Volocopter as “essentially a flying car” at the keynote.

The technology used in the Volocopter is called Intel Flight Control Technology which is also used in Intel Falcon 8+ drone that is designed for industrial inspection, surveying, and mapping and also the smaller Shooting Star drones used in its record-breaking light shows.

The Volocopter is designed by a Germany-based company that launched in 2012, with its first flight in 2013. It also completed manned tests in Germany and unmanned tests in Dubai. On Monday, it made its first entry in the United States at CES stage at the Park Theater at the Monte Carlo Hotel with two seats open.

At the keynote venue, a glimpse of the Volocopter was shown where it took off without a pilot flying it while it was tethered down. 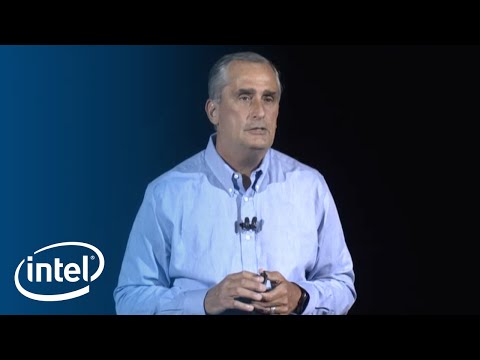 The event also featured a video of  Krzanich riding the Volocopter at an exhibition hall in Germany last month. “That was fantastic,” Krzanich said once back on the ground. “That was the best flight I have ever had. Everybody will fly one of these someday.”

Talking about the Volocopter, its CEO Florian Reuter said it was “extremely simple to fly, quiet, and when running on its batteries, emission-free.”

However, the flying cars won’t be available just yet until it receives authorization from the Federal Aviation Administration.