A good news for all the WhatsApp users. WhatsApp is introducing a new feature called Status that uses a similar format of Snapchat Stories. Instagram copied or added Snapchat’s popular Stories feature in August 2016. It is a tool that lets users share photos and videos for up to 24 hours before they disappear.

On Monday, Facebook-owned WhatsApp, became the latest Facebook property to launch a Stories feature when it unveiled a new version of its existing status update option called as WhatsApp Status. “The original idea behind the project was to build an application that lets your friends and other contacts know what you’re up to,” CEO Jan Koum writes.

WhatsApp mentioned in a statement that:

“We are excited to announce that, coinciding with WhatsApp’s 8th birthday on February 24, we are reinventing the status feature. Starting today, we are rolling out an update to status, which allows you to share photos and videos with your friends and contacts on WhatsApp in an easy and secure way. Yes, even your status updates are end-to-end encrypted.”

This update could put a brake on Snapchat’s growth. Instead of posting a short status message like “Feeling Happy” to your profile, the new feature lets you share photos and videos in a montage format for up to 24 hours before they disappear. One of the special features in the update is that it’s end-to-end encrypted like WhatsApp messaging.

Users can watch updates from friends and reply privately, send their creations to all their contacts they’ve chosen with a persistent privacy setting. Status could also open up new advertising opportunities for WhatsApp. The new Status feature replaces WhatsApp’s old AOL Instant Messenger-style away messages. That was actually WhatsApp’s only feature when it launched almost exactly 8 years ago.

Why WhatsApp Status Update Is Unique:

There are some elements that make WhatsApp’s version of Stories unique, you can share GIFs to your Status, for example, and all Status updates are end-to-end encrypted, which means that once they disappear they really disappear. Videos can be 45 seconds long, not just 10 seconds like on other platforms, and Status updates are only shared with users in your address book, not followers you may not actually know. 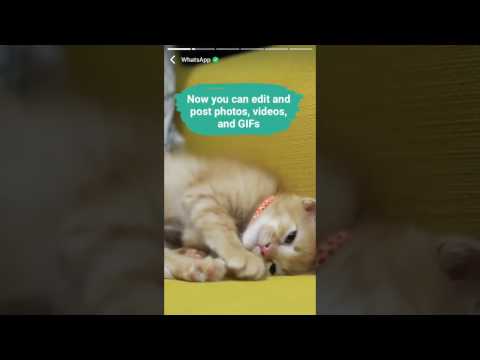 WhatsApp tested the feature for beta users in November, and now the Status tab is rolling out on iOS, Android, and Windows Phone soon. According to the reports of WhatsApp, it has 1.2 billion monthly users, with users sending 60 billion messages per day, including 3.3 billion photos, 760 million videos, and 80 million GIFs.

Dr.News The Mobile App To Feast Your Eyes On The Latest News

Nowadays due to the busy schedule, people are missing out the trending END_OF_DOCUMENT_TOKEN_TO_BE_REPLACED